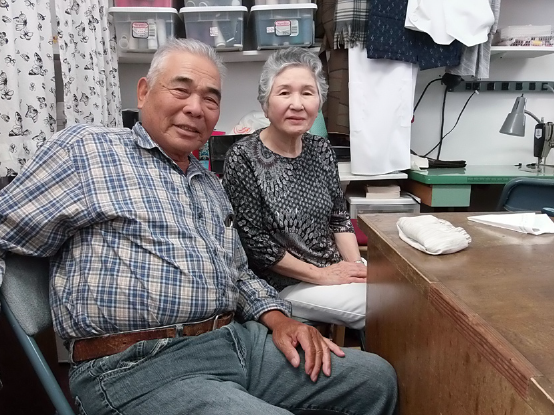 GARDENA – Run by 70-year-old Shin-Issei (post-war Japanese immigrant) women, two craft supply stores on Western Avenue in Gardena are facing a crisis and will have to close after nearly 40 years of ‘activity.

One of the stores, Let’s Knit Yarn Shop (16126 S. Western Ave.), will close at the end of this month. The other is Towa (16127 S. Western Ave.), a cotton fabric and sewing supplies store. Both owners are passionate about crafts and have been supported by their husbands and families, but neither of their children are interested in taking over their business.

Their customers are asking them not to close stores, but both owners say it is becoming difficult to run businesses due to their age and they would like to retire.

Let’s Knit Yarn Shop is run by Saeko Oyama, a native of Fukuoka who married a Kibei, Kiyoshi – whom she met in Fukuoka High School – in 1955. They came to the United States in 1960 and she opened her store in 1973.

“We had a lot of Issei speaking Japanese and getting together having fun knitting over a cup of Japanese tea,” Oyama recalls. â€œAt that time, some Issei or Nisei told me that they had learned to knit while they were in the internment camps. I learned a lot from their life experiences by chatting.

Over the years, in addition to teaching knitting and crochet, she became a certified bunka shishu (Japanese embroidery) instructor and also began framing finished work. In the late 1980s, she began to design and frame miniature origami (tsuru) cranes for decorations, which earned her the nickname “The Lady Tsuru”.

â€œI have two daughters in their early fifties. One is a teacher and the other has a law degree. But they’re not interested in taking over the business, â€said Oyama, who will be 80 in a few months.

In 1979, Oyama noticed that a textile store across Western Avenue was going to close. She told one of her clients, Toshi Fukunaga, from Kagoshima, and encouraged her to open a textile shop there.

Her husband Matsuo, also from Kagoshima, ran a nursery and also worked as a gardener. He agreed to invest in his store.

â€œI’m happy that she has something that she can enjoy and that she has a passion for it. I think the store started out as a hobby, â€Matsuo smiles. He retired from his business, Fuku Nursery in Gardena, in 2007. Toshi says, â€œMy husband was the breadwinner and without his support I couldn’t have done it.

Toshi is now 73 and has been considering retiring for five years, but none of her three children are interested in taking over the business. â€œThey asked me, ‘Is your business profitable?’ and I said, ‘No.’ Then they are not interested in doing business. For the sake of his clients, â€œI’m looking for someone who can take over the lease and continue the business as is.

In this store, there are two sewing machines which are used daily for alterations, and the textile stocks include fabrics imported from Japan, such as manekineko (lucky cat) and kamon (family crest) designs, and they are mainly cotton. .

A few local Japanese ladies came to help her sew as volunteers. â€œThe size of the store is approximately 1,200 square feet and it can be split in half to accommodate sewing lessons. If two or three people could run it in a cooperative, that would be fun, â€Toshi says.

Never Shop The Hobby Lobby Again: A List of Alternative Craft Stores Both Chain and Independent