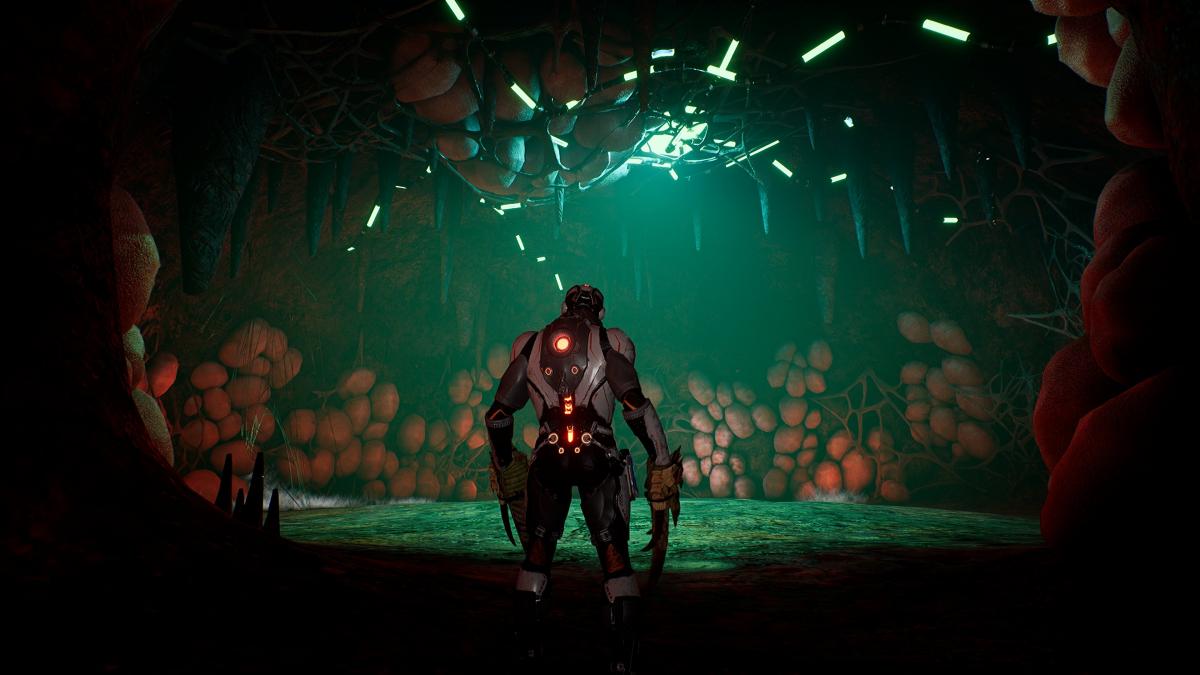 Let’s make it a fair fight

Dolmen is an upcoming game in the Dark Souls-style Die, Die and Die Again genre, and I was lucky enough to play a preview version, which offered a few select sections.

The formula will be quite familiar to those who have played a ”Souls-like”. Dolmen’s sci-fi setting allows you to gain nanites from enemies after defeating them in battle, which you can use to boost your character’s stats. If you die you lose all your nanites and you can get them back by finding your body. Don’t die again or you’ll lose them all. You have a stamina meter that depletes from attacks and recharges over time. Your main goal is to reach the next beacon, which heals you and respawns enemies, your ultimate goal is to reach the boss and defeat him to get to the next area to start all over again, explore and discover.

Dolmen doesn’t stray too far from the ‘live-die-repeat’ formula, but still makes enough of a difference to warrant a look. Most interesting is the introduction of ranged combat at any time using energy weapons.

You have a bar of recharging energy that you can use to improve your physical attacks, as ammo for ranged attacks or for healing, which permanently uses part of the bar. You can recharge the bar using batteries.

The combat was a little weird the first time I picked it up, but after playing the preview a few times, it’s enjoyable, even if it’s kind of floaty. Weapons can perform light or heavy attacks and you can chain them together. You can dodge and link dodges to attacks. I like that you can always back up in front of enemies and shoot them if you get overwhelmed. One puzzle was the fact that stamina was replenishing slower than usual, forcing a more defensive style of play.

Each enemy is weak to one element. If you hit an enemy enough with this element, they will take more damage. Some weapons will also do more damage.

Something I really disliked about combat was how enemies were hard to see while you were attacking them, and barely reacted to your attacks when unaffected by an element (and sometimes when they are too). Oftentimes, they just slip through your attacks and deal so much damage that you’ll use up all of your healing energy, forcing you on the defensive again.

Another issue I had was the bosses. It seems like they’re just ignoring the combat system they’ve built when it comes to boss fights, which is such a shame. Trying to hit bosses with elements is a wild ride, as they recover extremely quickly and you don’t have enough energy to sustain it. They also completely discard the game’s parry mechanic, with most boss attacks being impossible to parry and block.

The two bosses I fought could shoot me quite easily, as well as several attacks in which one hit brought in more, killing me with the combo. They’re armed with unpredictable, massive attacks designed to eliminate you almost instantly and force you to try again, but there’s no way of knowing what’s going to happen until it does.

One disappears before teleporting behind you without the sound cue of all the other teleports it’s using, and nearly kills you in one fell swoop. Boss fights should be challenging, but balancing that challenge with fair combat is hugely important, and I don’t think Dolmen does that yet.

Instead of finding weapons and armor or buying them, you craft them with materials you scavenge from enemies.

Although I couldn’t use this feature, you can spawn bosses and fight them again. I really like this feature with the crafting item, and I hope we can craft powerful boss weapons if we defeat them enough times. One planned feature that I didn’t get to use was multiplayer, where you can bring in another player to help out with a tough boss.

Dolmen feels a bit crude at the moment. His combat has a decent flow, but it’s kind of floaty, and enemies just walk right through everything. The bosses aren’t balanced enough and the systems in place need more support to not get in the way of players.

However, there is some groundwork for a good game here. The little story snippets I got were interesting, the combat has some good elements, and I really think the crafting system will encourage a huge variety of playstyles.

Dolmen is set to release this year on PS4, PS5, Xbox One, Xbox Series S/X, and PC.

Over 4,000 online applications for land allocation received by Department of Industries: Officials