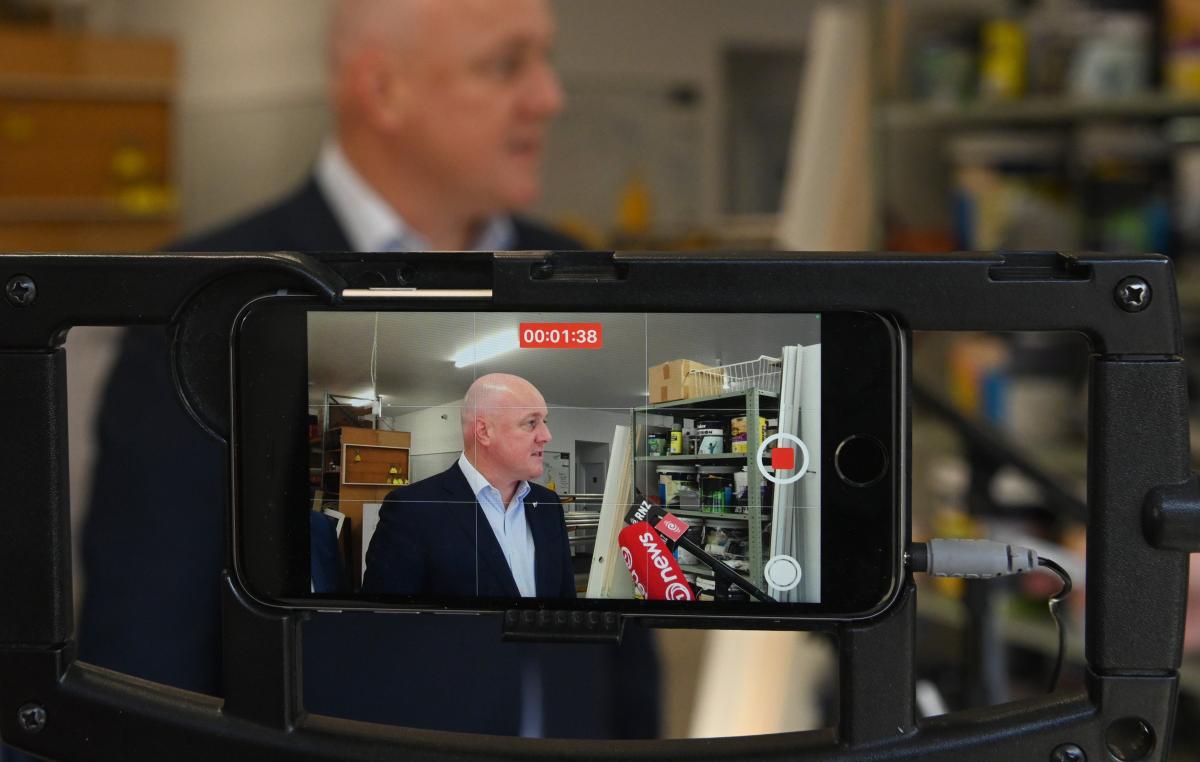 Luxon settles in for his lengthy job interview

National Party leader Chris Luxon has now been in his new post for six months, a milestone not all of his many predecessors have reached.

While visiting Dunedin this week, he spoke to political journalist Mike Houlahan about his party’s ride and where the national hopes will be for a stable future.

It has been difficult for southerners to avoid the new leader of the National Party, Chris Luxon.

Unlike some who came before him, Mr Luxon has been a regular visitor to the area since he was named party leader six months ago: two trips to Queenstown, trips to Waitaki and Invercargill and two visits to Dunedin over the past few weeks.

He maintains a grueling schedule of provincial tours and the novelty has yet to wear off, down to the enthusiasm of Tigger with which he bounced in front of people when he met in Dunedin on Thursday to introduce himself.

“The whole country sees me a lot: I’m in Wellington on Tuesday and Wednesday, then I get out of Wellington as fast as I can and I spend Thursday, Friday, Saturday and Sunday visiting two or three towns in New Zealand,” Ms. said Luxon.

“I think a lot of my job is to go out and meet people… to find out what’s going on, real New Zealanders, and I think there’s a real temptation if you’re in Wellington to end up getting caught up in the ring road there and losing touch with real New Zealanders on their challenges.”

The MP for Auckland, raised in Christchurch, is well aware that his life experience is different from that of many of those whose votes he solicits: as a senior Univer executive, he has lived in Sydney, London, Chicago and Toronto before coming home to become a chef. CEO of Air New Zealand.

Deft use of humor helps make a connection – chrome-domed Mr Luxon fires an easy laugh when referring to how many shampoo companies he’s bought, and another when confessing to acquiring a potentially losing love for country music while living in the United States.

He also has a touch in common…when confronted with a lorry full of power tools, Mr Luxon’s DIY enthusiast couldn’t resist a conversation about drills.

But he also keeps his rigor as a businessman for detail and his sense of numbers: by addressing Business South, he was able to quote a series of statistics, impromptu.

It was this ability, among other things, that prompted Prime Minister Jacinda Ardern to appoint Mr Luxon to head her business advisory board … a somewhat ironic hire considering things.

“You compartmentalize it,” Mr. Luxon said.

“I’m old fashioned when it comes to the fact that if a Prime Minister or a President asks you to do something, do it…for me it was about New Zealand, but as I saw it up close, I decided there was a real opportunity for us to go to work and get things done and get some solutions to the problems we have in this country.”

Despite only becoming an MP in October 2020 and party leader last November, Mr Luxon is quickly learning his new trade: During a media stand-up in Dunedin, he resolutely refused to be fired upon whether New Zealand’s name should be changed to Aotearoa, despite being asked three times.

The issue, occasioned by a petition from the Maori party on the issue, had more spice due to a minority of outraged responses on social media to Mr Luxon’s choice to post a farewell to the late Joe Hawke on social media, in Maori.

Mr. Luxon, who has been taking a weekly te reo class for some time, then refused to back down and sticks to his principles although it may cost him a few votes.

“For me it was very simple: Joe Hawke was a great New Zealander, he was an outstanding leader for Maoridom, I wanted to acknowledge his passing in te reo and thought it was very appropriate; it was his mother tongue,” he said. .

“Yes there was some reaction: I haven’t read all the comments and frankly I don’t spend a lot of time online looking at the comments…some of the comments were racist and I condemn them outright, to others were people saying ‘I have a different view, Chris.

“They have a right to free speech and I will defend their right to say something I don’t agree with, but in the end I thought it was appropriate.”

But what Mr. Luxon really wants to talk about, and he meticulously memorized his talking points, is the cost of living.

Inflation continues the government’s rosy economic message of record unemployment and has been the baton with which National has beaten Labor for months.

Mr Luxon suggested indexing tax thresholds to inflation and other tax adjustments to put more money in people’s pockets, while criticizing the government for inflationary spending.

Why wouldn’t his plans be inflationary, but the government’s?

“There is an inflationary component, I understand, but the New Zealand public has the choice of saving as much as spending that money and given how [Finance Minister] Grant Robertson is addicted to spending, the public will spend that money much more wisely than him.”

At his party’s caucus retreat in Queenstown earlier this year, Mr Luxon pledged to lead an opposition that offered solutions rather than criticism: does he feel the party is delivering on that promise?

“I think we oppose the government where it makes sense, we are constructive when we think there are good things they are doing, and we come up with ideas.

“Take the example of law and order. We have a major problem with crime in this country. We’ve had a 21% increase in serious violent crime and a 40% increase in gang membership, each day there was a shootout or a ram raid, so what was our solution?

“We would really like to have a dedicated gang unit, we would like to have gun prohibition orders with warrantless search powers so that we can tackle the problem, which is illegal guns, and we’ve talked about the police reviewing their prosecution policy – the police announced two days ago that they were going to review this policy, that’s a good result, that’s what I meant by proposing.”

Mr Luxon’s novelty as a national leader has yet to wear off: Latest polls suggest the party has a realistic chance of winning next year’s election, although there is still a long way to go. browse before election day.

“I can look at all the MPs in my caucus and see the contributions they make, the commitment they have, the way they work together, the way they engage with industries and the community sector, and I’m happy with our progress,” Mr. Luxon said.

“But it’s not about us, it’s about our ability to come up with ideas that really move this country forward and really address our problems and realize the opportunities that we have.

“It’s the job for the next 18 months, and it’s a big job interview for me and my party.”