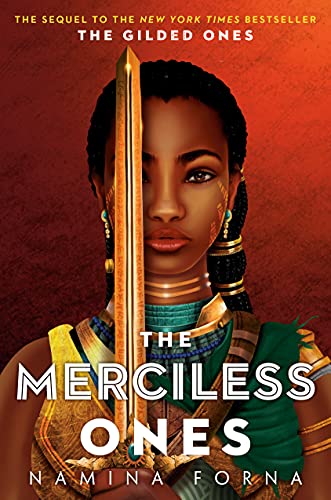 Former outcasts turned warriors and liberators, Deka and his friends are back on the battlefield in The ruthlessFollowing Walleyes (reviewed here May 2021), this time to free the rest of Otera’s goddesses and women. As a Nuru, or only pureblood daughter of the goddesses, Deka is the strongest of her friends and was chosen by the Mothers to lead her blood sisters and her male equivalent jatu into battle. More confident and fully realized after the events of WalleyesDeka leads his army against a kingdom that mercilessly kills anyone who sympathizes with its cause.

With the ruined ancient temple of the Gilded Ones as their home base, the girls venture on a mission while the Mothers gather their strength. But even with her growing powers and the support of the Mothers behind her, Deka has a new complication: deadly screams (violent creatures that are actually monsters turned alaki) that she cannot speak to, and a symbol on the armor of his enemies. who repels his powers. Not only that, but a false god named Idugu is gaining power over Otera, threatening his mission to liberate the kingdom.

The ruthless picks up six months after Deka and his friends free the mothers from their prisons. Although Deka knows she can be whoever she wants to be, the scars of her battles stay with her – she is always afraid of making bad decisions, especially when leading her friends and army behind enemy lines. This leads to terse moments where it seems like a single mistake could uproot everything she and her blood sisters fought for. Her unresolved trauma also follows her, leading to touching scenes between her romantic interest, Keita, and her friend Britta in particular. The support of his friends is something Forna delicately crafts in quiet moments between bloody battles, and that’s where the characters shine. These reflective moments are when readers see that the girls, especially Deka, Belcalis and Britta, were forced to grow up fast and now come to terms with the fact that the older women and mentors in their lives haven’t. do. There’s a particular scene between Deka and a seemingly minor character from the last book that spoke clearly to these themes: Deka learns the hard lesson that not all women want liberation and are happy to be tools of the empire to ensure their safety. Some of them are more aware of this dynamic than others. Forna does a great job of showing how an oppressive system holds together, even if some of the bad guys are cardboard. Their dialogue still serves to explore the values ​​learned from Deka and offer a strong feminist approach to topics of liberation and freedom to readers.

The cast is mostly made up of the characters from the first novel, including mentors from the first book who join them in battle and handle other conflicts across the kingdom. The jatu, including Keita and the rest of the boys from the previous novel, are now wanted by the Oteran Empire for helping the goldens escape. There is individual character development throughout the novel, but, with the exception of Deka, it is so fleeting that it becomes difficult to understand how these traumatic experiences impacted them.

With the exception of the main villains we meet later in the book, most enemies in the book are also undeveloped on an individual level. Evil priests and false gods remain on the periphery of the novel until they are needed for the fight scenes. Even as the main antagonists take on increasingly complex roles, the henchmen are never fully realized in a way that makes them satisfying adversaries. For how often they appear, we never learn how the boys are initiated into the priesthood, or if any of them attempt to leave. Some additional developments earlier in the book may have sparked a little more curiosity on my part as to what would happen to them or how the battles would play out.

While the novel’s initial villains aren’t fully developed, the book’s themes are quite mature despite its young adult rating. Forna discusses capabilities, chosen family, sexuality, gender-based violence, and other themes in a way that is appropriately nuanced for the audience. In one scene, the question of wearing a mask, or when women cover part of their face to show purity, blurred the line between the protagonist’s voice and Forna’s voice. Similar to the mask discussion, there were other moments of exposition that interrupted the flow of the book, but these were rare. Most of the time, Forna’s voice is well balanced with Deka’s and shines brighter when the characters’ actions are allowed to speak for themselves.

Forna’s imaginative settings are also surreal – gorgeous depictions of abandoned ruins and red cobblestones were both atmospheric and immersive. Melanis, one of the goddesses Deka frees at the start of the book, is another complex character portrayed in evocative detail, down to her complex emotions and bitter dialogue after years of torture. I enjoyed her interactions with Deka the most, as they approached the themes of the book in an intelligent and natural way.

The ruthless is fast-paced, and I found myself looking forward to Deka’s conversations more than any fight scenes. Those who were always in danger had the same intensity as his dialogues with his enemies.

The end of The ruthless This is where Forna’s keen ability to write action scenes and characters is most evident: it was a complete shock to me, and weaved it so neatly throughout the book that it felt like it should have be obvious. The ruthless plays to all the forces of Forna de Walleyes: precise and clean prose, an immersive world, realistic dialogues and fearsome girls ready to face the empire and the gods who nearly destroyed them.

Maya C. James is a graduate of Georgetown University’s Lannan Fellows Program and a full-time student at Harvard Divinity School. His work has appeared in line of stars, Strange horizons, FIYAH, Soar: For Harrietand Georgetown University Berkley Center Blog, among others. She was recently longlisted for the Stockholm Writers Festival First Pages Prize (2019) and participated in a feminist speculative poetry panel at the CD Wright Women Writer’s Conference 2019. Her work focuses primarily on Afrofuturism and the imagining sustainable futures for communities at risk. You can find more of her work here, and follow her on Twitter: @mayawritesgood.

This review and others like it in the July 2022 issue of Venue.

While you are here, please take a moment to support Venue with a one-time or recurring donation. We rely on reader donations to keep the magazine and site running, and would like to keep the site paywall free, but WE NEED YOUR FINANCIAL SUPPORT pursue quality coverage of science fiction and fantasy.

©Locus Magazine. Copyrighted material may not be republished without permission from LSFF.

What are installment loans and how do they work?