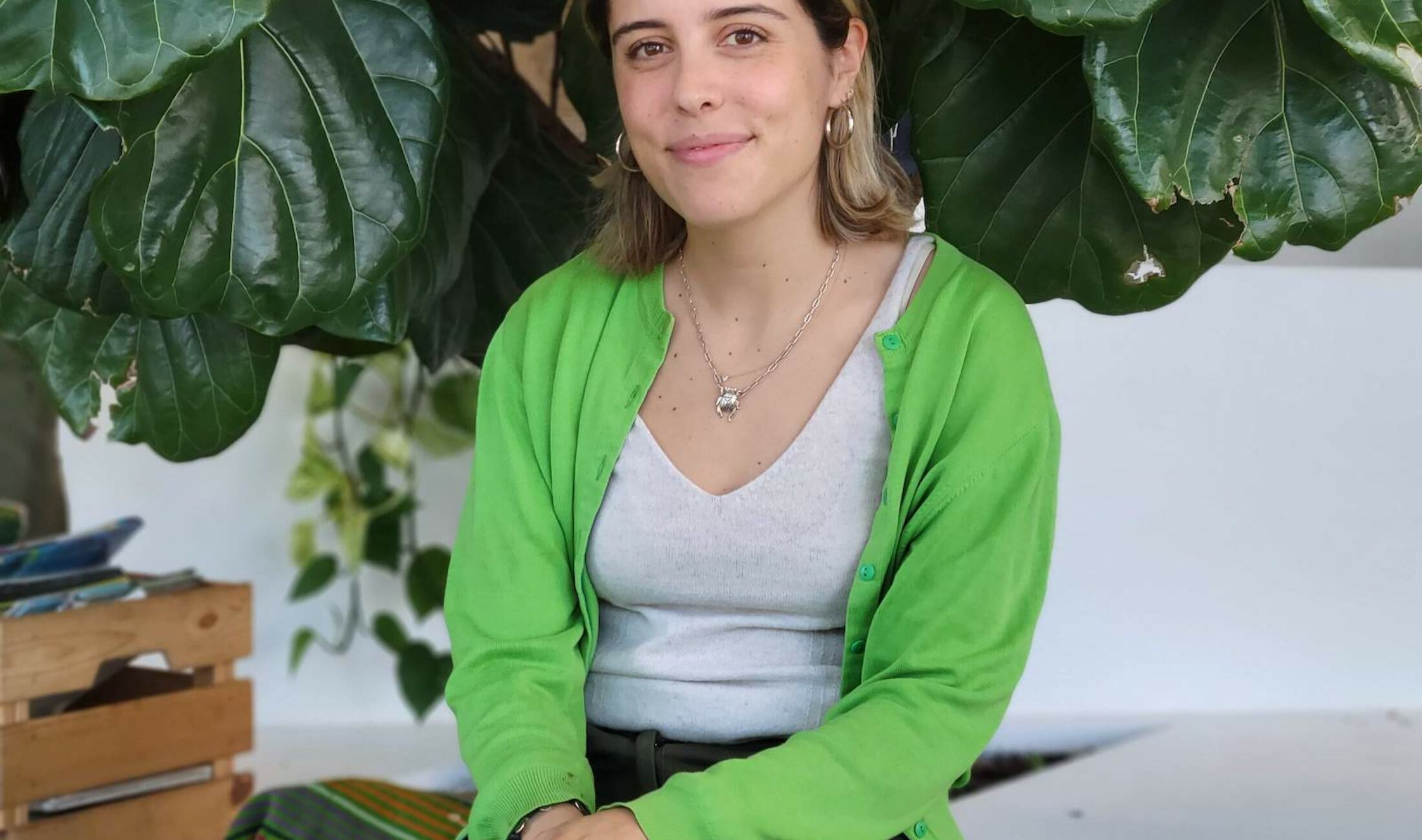 On weekdays, Mariana Rivera is an artistic and curatorial coordinator for a major art consulting firm. But on the weekends, she seeks out local emerging artists and curates pop-up exhibitions alongside an online gallery, known as The art shop. Six pop-ups later, TAS is finally opening its own permanent showroom at the Vancouver Mural Festival’s City Center Hub.

“TAS got involved with VMF by building community,” says Rivera, “City Center Artist Lodge seems like the perfect fit for our showroom because of VMF’s long-standing efforts to build community, showcase incredible artists and making art as accessible to the public as possible.” Following the recent announcement of this exciting news, we caught up with Rivera to learn more about TAS and the driving force behind it…

Rivera immigrated to Vancouver from Mexico with her family when she was nine, eventually pursuing art studies at the famous Corcoran School of Art and Design in Washington, DC. While working with the Mexican Cultural Institute and other galleries in DC, she participated in an art fair in New York. This is where the whole art world opened up to her and led her to study Art Business at Sotheby’s Institute of Art (New York). During this time, Rivera was interned in numerous galleries (typical for anyone trying to get a foothold in the art world) and faced the pretentiousness of it all – there was an obstacle to just viewing art. At a gallery where she worked (now closed), visitors even had to zoom in to see the space. It all seemed like such a shame – to have so few visitors through the doors, when there were amazing exhibits and artwork inside. Since then, Rivera has made it her mission to fight to make art accessible and accessible – bringing art to “the people”.

It was during the height of the pandemic that Rivera found herself without a job. Instead of working, she used that time to think and dream, and came up with a business plan for The Art Shop. In August 2020, she rented expensive retail space in the heart of Gastown, where she hosted the first-ever TAS pop-up. For six days, the exhibition art to the people featured 14 artists and was well received. Rivera has found that even (or especially) during a pandemic, visitors crave the opportunity to be introduced to local artists, support them, and buy art — often for the first time.

Riviera reflects and speculates on the growth process: “I think emerging artists have responded to us faster than the public due to the lack of spaces that show their work in the city. Audiences started reacting to TAS as they got to know us. At every show, and in everything we do, our goal is to be as welcoming and accessible as possible to people who don’t know art, and I think that’s allowed our audience to grow alongside us.

Since that first exhibition, TAS has held five other pop-ups at various locations, such as the Museum of Vancouver and August Studios, each with a theme and an educational component. The last show was in April 2022, in his hometown of Xalapa, Mexico. Title The Monarcha, the exhibition brought together the work of four artists from Vancouver and four artists from Xalapa. TAS has found a model to provide an accessible environment for viewing artwork, which includes an online gallery and an accessible price for acquiring artwork. The works available generally range from $50 to $1,000 (rarely more), with the average price for an original work being $200 to $400.

“By creating a support system in the beginning, these artists will continue to create, find spaces, build community, and ultimately continue their creative careers. I believe we have to build and help push at the beginning to form a solid and united journey at the end.

Through The Art Shop, Rivera has also found a new way to represent artists – to begin with, one that isn’t exclusive. She nurtures relationships with early-career artists, promotes their work, manages their inventory on the website, and finds opportunities for them to exhibit their work and for the public to see and connect with. .

For Rivera, discovering local artists and building community is something she is passionate about. It’s like discovering hidden gems, where one artist often leads to another. Artists are here in our community, we just have to watch. As for the future of TAS? Rivera imagines a TAS Toronto! and TAS Montreal! Her hope is to one day see The Art Shop continue to exist beyond itself.

By creating a support system in the beginning, these artists will continue to create, find spaces, build community, and ultimately continue their creative careers. I believe we have to build and help push at the beginning to form a solid and united journey at the end.

After so many successful pop-ups, why start by switching to a more permanent setting? Finding a longer-term space was not part of our original plans, but as with all serendipitous things in life, we truly believe that the coincidence of community and opportunity led us to this decision. Once the opportunity presented itself, we considered the logical aspect of affordability. Renting temporary spaces is incredibly expensive in Vancouver. Part of our original goal was to have our pop-ups occur in high traffic locations to gain as much exposure as possible. A 5-7 day temporary exhibition would end up costing us more than you can imagine. Now we are excited to continue building a community with our fellow creatives at City Center Artist Lodge and hope that by having a more permanent space we can welcome many more visitors and expand our audience.

The City Center Hub is home to many artist/business studios but eventually when the building is demolished all of these people (including you) are going to be relocated and looking for affordable space again… In your opinion, what changes to Vancouver’s art scene need to happen in order to make the city a more welcoming place for artists and accessible to art? Yes, the City Center Hub won’t be here forever, unfortunately, but I think the initiative can be a great example of future opportunities to provide affordable spaces for the local arts community. As the city grows and will continue to grow, changes in building ownership and structure allow for a transition period that creatives can occupy. But other than that, I think to make Vancouver more welcoming to artists and accessible to art, we need more people to support emerging artists. The term “emerging artist” seems quite redundant because it is widely used, but what I mean are artists who are just starting their practice, who have just finished their studies or who are creating works from their apartment, or who do not have never shown their work to the public. By creating a support system in the beginning, these artists will continue to create, find spaces, build community, and ultimately continue their creative careers. I believe we have to build and help push at the beginning to form a solid and united journey at the end.

Tell me about an exciting or surprising discovery of an artist that you experienced and that marked you. There are so many amazing local talents. I think one of my favorite stories is how I started working with TAS artist Wendy Hanlon. It feels old school compared to how I normally investigate artists via social media or their websites. I walked into Cafe Arbutus in Kitsilano on a sunny Sunday morning and was immediately taken by two large paintings hanging on the wall. I still remember the larger than life figures and typical colors that Wendy uses. That same day I messaged her to meet me and since then Wendy has been part of two of our shows, one in Mexico where two great paintings now live.

Check out the TAS showroom on weekends starting this week. The first show is called Franchise reassessment and features Ben Evely, whose work uses the surpluses and waste left by artistic creation. It opens Friday, October 7, with a reception from 7-9 p.m. – save the date! Evely’s work will continue to be viewable every weekend until October 23rd. Gallery hours are Saturday and Sunday, 11 a.m. to 4 p.m.

It is also the first time that TAS will present solo mini-exhibitions, allowing each artist to use and transform the space as they wish. Other artists we can look forward to seeing over the next few months include: Kitty Zhang, a new addition to the TAS roster of artists, who works primarily in painting; and collage artist Isabelle Crane Lee. For the holidays, TAS is planning a group exhibition around the theme of luck and chance. Follow @tasvancouver for more details.