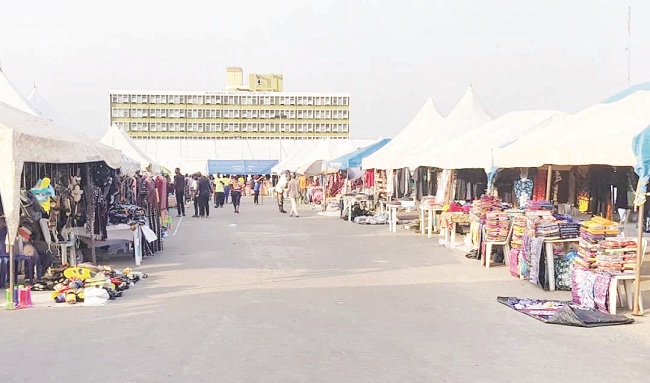 The ongoing National Festival of Arts and Culture (NAFEST) cultural market in Lagos has been declared open for commercial activities, with different pavilions promoting Made in Nigeria products.

The Chief Executive of the National Arts and Culture Council (NCAC), Chief Olusegun Runsewe, organizer of the festival, told the cultural market that the essence of the market is to ensure that Lagos State, the host state of NAFEST, is benefiting from a certain level of economic stimulus.

He noted that the market was also meant to showcase Nigeria’s fine arts and crafts to the world, urging state delegates to visit the market to patronize locally made handicrafts.

“Nigeria is well endowed. This market must show creativity in Nigeria,” he said.

Earlier, Ms. Uzamat Akinbile-Yusuf, Lagos State Commissioner for Tourism, Arts and Culture, said, “Having commerce around the festival is strategic.

“I implore Nigerians who have come to Lagos for NAFEST to visit the market place with the aim of buying our handicrafts and arts.

“I appreciate Lagosians for hosting Nigerians. After this festival, Nigeria will be stronger and bigger.

Meanwhile, the ongoing National Arts and Culture Festival (NAFEST) has continued to create a commercial mood for Lagosians as more than 29 states and the Federal Capital Territory from across the federation arrive at the Center of Excellence from Lagos State.

With most of the events concentrated in the National Institute of Sports section of the Surulere National Stadium, while the Onikan Stadium on the island is reserved for the opening and closing programs.

The two sites and other areas near the sites benefit from the right of reception.

The performances at the opening ceremony of the iconic festival were described by some revelers who spoke to the News Agency of Nigeria (NAN) in separate interviews as electrifying.

Some states also showcased unique aspects of their culture during the performance, highlighting their major concern, arts and crafts.

Earlier, Chief Runsewe noted that if Nigeria is to become great again, the culture of the nation must be continuously promoted.

He said Nigeria was the most united nation so far, adding that the nation’s lost glory could be revived through the exploration of culture.

Runsewe, who referred to how Lagos State has contributed to global growth in sports, tourism and entertainment, said culture is also a real tool in eradicating poverty in the country. .

He commended Governor Babajide Sanwo-Olu of Lagos for his efforts to ensure that the 35th NAFEST is held in grand style.

He described Sanwo-Olu as a man with a passion for tourism, arts and culture.

“Today we have 29 states here in Lagos celebrating our diversities and our cultural heritage. For me, this is the best country in the world,” he said.

Ms. Akinbile-Yusuf urged Nigerians to visit the state known as the City of Excellence and Aquatic Splendor.

“I want to implore everyone here present, especially our contingents from other states across the country, to take the opportunity of this festival to explore the abundant tourism potential in different parts of Lagos State.

“Here in Lagos, our nightlife remains top notch, being a 21st century economy.

“You’ve heard of the popular phrase ‘Eko for Show’ which echoes the creativity, pomp and ceremony unique to Lagosians,” she said.

How to get the best payday loans