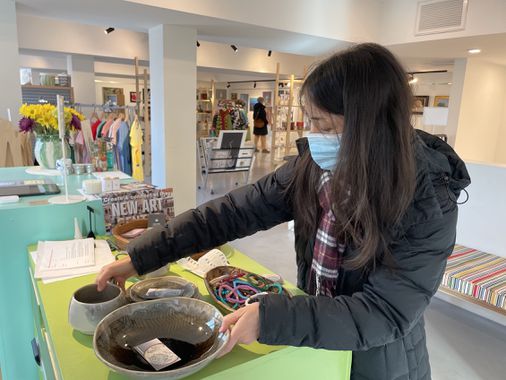 Newton artists sell their wares at the New Art Shop

The New Art Shop launched a three-weekend pop-up shop in late November selling the various wares of 45 local artists, with more than half from Newton artists and the rest from the Boston area. Emily O’Neil, executive director of the New Art Center, said her goal was to transform the space into a co-op-style shop for local artists to sell their pieces while running the shop themselves.

Currently, artists earn at least 65% of the profits from the sale of their work, O’Neil said, and if the shop becomes a full cooperative, the artists who run the shop will also earn hourly wages. The works sold in the shop vary from homemade candles and soaps to ceramics and wall art to books written by local authors.

“Our hope is that at the culmination of our nine days of shopping, we will have enough evidence to prove that there is enough community interest to sustain a retail business,” O’Neil said.

The New Art Center, a Newton-based nonprofit arts education space, currently supports the volunteer-run shop. If the shop were to become a more permanent cooperative enterprise, it would be run entirely by the artists, more independently of the Center, according to O’Neil and Kim Spencer, who founded the initiative together.

“Sales were brisk,” Weinberg said, as 27 of his 39 pieces in the shop had already sold out and he was asked to bring more.

In the six days the store has been open, sales have been “robust” and “above initial expectations,” Spencer said. There were an average of 30 transactions per day, she said, and the New Art Shop predicts overall gross sales for the nine days of sales will be close to $20,000.

Sayaka Rawizza, a ceramic artist and teacher at the New Art Center, said the shop was “important in supporting the community”.

She said the shop was “an ideal style” for her this year during the pandemic, as it was less crowded and better ventilated compared to more traditional art fairs.

Sarah Kahn, a mixed-media collage artist and instructor at the New Art Center, said on the first night she got a call from the shop that she had already sold four of her pieces and that they wanted she brings two more.

“I was so excited to think about selling myself to the community,” Kahn said.

Weinberg said it was more important to her that people “have my pieces in their homes” than the money made from sales.

“Having a place where local artists can sell their work is really important to the community,” Weinberg said.

O’Neil said the New Art Shop is the only store in Newton to sell works exclusively by local artists.

“We hope people will shop locally, support local artists, support the community, and allow us to move this forward as an ongoing retail business,” O’Neil said.

The shop will be open for its last weekend of the season from Friday December 10 to Sunday December 12. Hours can be found on the website.

Katherine Hapgood can be contacted at [email protected]

The closing dates for all Christmas attractions in Swansea