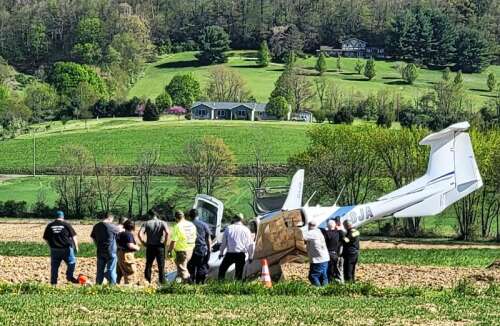 The National Transportation Safety Board recently completed a preliminary report into a May 9 plane crash in West Penn Township.

Lead investigator Todd Gunther said the pilot was able to make a smooth landing after engine failure, but the craft was “substantially damaged” after it slid into a ditch and rolled over.

“The flight instructor, student pilot and pilot-qualified passenger were uninjured” in the 11:45 a.m. crash,” Gunther noted in his report.

The plane, a Diamond DA-42, had taken off from Allentown.

“According to the flight instructor, he was conducting flight training in the twin-engine aircraft northwest of Allentown, Pennsylvania,” Gunther said.

The training included a simulated engine securing exercise, which mimics an engine failure.

During the exercise, the aircraft descended a few hundred feet. The crew went through the aircraft’s restart procedure, which Gunther said “took a while.”

“They slowly increased manifold pressure to keep shock cooling to a minimum, and as they slowly advanced the throttle it became apparent that the engine was not producing power and the propeller was just pinwheel,” Gunther wrote.

“At this point the aircraft was descending and abeam ridges and the flight instructor elected to perform a forced landing in a field,” according to the report. “The touchdown was smooth and under control, but the aircraft then slid into a ditch at the side of a road that crossed the terrain, and the aircraft nosed over.”

After the plane came to rest near the intersection of St. Peter’s and Golf Roads, the passengers turned off the fuel and the power switch. All escaped unharmed.

The wreckage was retained for examination, Gunther noted.

Jennifer Gabris, spokeswoman for the NTSB, said the report contains all known factual information to date.

“Final reports take between 12 and 24 months to complete,” she noted.

A registration number from the aircraft indicates that the owner is Elias Salameh of Bethlehem.

Loans for low-income people Personal loans for a tight budget