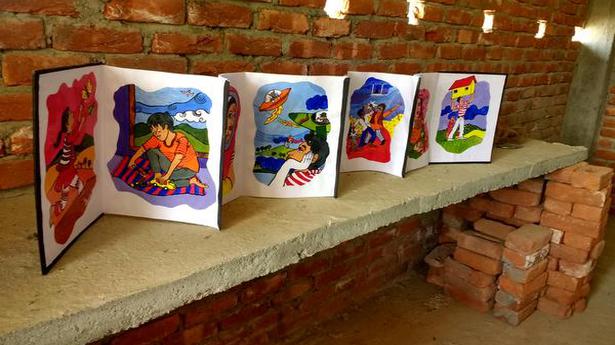 Shop Art Art Shop: an art residence in the hills of Himachal Pradesh

You will find her working in a blue house as you go up the village. If you have any difficulty just shout his name, â€said Frank Schlichtmann, the man behind Shop Art Art Shop, a unique art residency that has become the pride of Gunehar, a small village in Himachal Pradesh. Schlichtmann was directing me to an artist’s â€œshopâ€ on top of a hill.

In 2013 Schlichtmann came up with the idea for Shop Art Art Shop aka SAAS, and invited artists from all over the country and from all disciplines to spend three weeks in the village working in abandoned houses and shops, using local infrastructure and in the light of curious spectators. The first edition featured 13 emerging artists and attracted over 6,000 visitors. The second edition in 2016 attracted more than 10,000 visitors. The third edition took place last week.

As I ascended in the direction indicated by Schlichtmann, admiring the picturesque Dhauladhar mountains dotted with houses with slate roofs, a group of villagers enthusiastically urged me to move on. Slowly my joyous ascent turned to dismay when I saw that most of the houses I passed were mostly blue. After half an hour of huffing and puffing, shouting the artist’s name in vain and without a telephone network, I decided that I was lost. And at that point, I came across a house that was more pink than blue, with the Antar Rekha / A Fine Line nameplate.

Inside, I met studio potter Devyani Smith, who insisted she was not an artist; upstairs above her was painter Asmita Sarkar’s space titled Uncanny Shop. Around a hot cup of tea, they recounted the storm of the day before.

A frail old man stumbled out of the “shop” and joined us. The house was his; he had “let him out” for the art residency. He had moved into his son’s new modern house just behind it. Every afternoon, he infallibly came home for a nap. â€œHe’s our only critic here,â€ Smith said. “When it sank yesterday, it helped cover all of our work with tarps.”

â€œVillagers usually don’t charge renting their homes for art stores,â€ said Bapil Kapoor, who had just returned home on leave from the army and was volunteering with SAAS.

SAAS-3 was made up of a curious motley of artists, including a textile designer, storytellers, a musician, a director of photography, a multimedia artist, filmmakers and ceramists. The 11 artists worked in their assigned “shops” from 9:00 am to 5:00 pm for more than three weeks before the residency ended with a week-long fair last Saturday. The theme of the edition was â€œBorderlines,â€ an exploration of the complexities of living in a world where borders are reimposed rather than dismantled.

The artists found different ways of approaching the theme: from mapping and studying the changing boundaries of nature-human habitat (Sultana Zana) to seeking a meaningful identity transition (Smith); from telling stories that shift the boundaries between reality and fantasy (FoundOnAllFours) to documenting changing fashion trends (Pramila Chaudhary). There were as many mediums as there were ideas: ceramics and found objects (Sarban Chowdhury), visual stories (Amritah Sen), documentary (Gaurav Gokhale), music (Yash Sahai) and tuk-tuk cinema (KM Lo).

Art to the people

â€œWhy Gunehar,â€ I asked Frank. â€œNo one asks why there are art galleries in cities. We need to take art out of tight, elitist spaces and make it more accessible to people, â€he said. Perhaps it is this urge that keeps him alive even when a lack of funds stares him in the face. â€œI cannot be a fundraiser, curator and sweeper,â€ he said.

SAAS is Schlichtmann’s provocative response to what constitutes the idea of â€‹â€‹art as practiced by institutions and galleries, given the poor infrastructure available for contemporary Indian artists and the culture of exclusion prevalent in the art world. With the Gunehar Triennial, he hopes to create a platform for emerging artists from various disciplines, where they can work without the constraints of a studio structure. In order to make the artistic process itself open, transparent and understandable to the public, visitors are invited to come and observe the artists at work. Over 100 artists applied for the residency this year; 12 were selected.

A woman and her portrait at ‘In the Woods’, an earlier event organized by Schlichtmann. | Photo credit: Frank Schlichtmann

As I was leaving the “blue” house in search of other artists, I met Lo, a guerrilla filmmaker from Hong Kong who, along with the children of Gunehar, made a zombie movie that collected 2.2 million views on YouTube. â€œThe kids loved putting on red luscious paint and walking in slow motion,â€ he said. This time, his plan was to build a tuk-tuk or autorickshaw with materials available in the village. It became a bioscope during the day with a built-in cinema projecting onto the wall and roof of the automobile. According to Lo, the children of Gunehar were very picky about the movies they watched, preferring Star Wars and zombie movies to recent Bollywood movies.

Yash Sahai, a musician from Mumbai spoke about converting his art store into a recording studio. â€œI want my guitar to sound like it belongs to here,â€ he said, speaking of how he recorded the music of the Gaddis, a herding tribe in Himachal Pradesh. “I want to create a repository of sounds.”

When I got home, I realized that cities don’t need to be the center of the world. In the midst of picking the ripened wheat, Gunehar also reaped a rich artistic awareness.

The writer works in visual media in Mumbai.