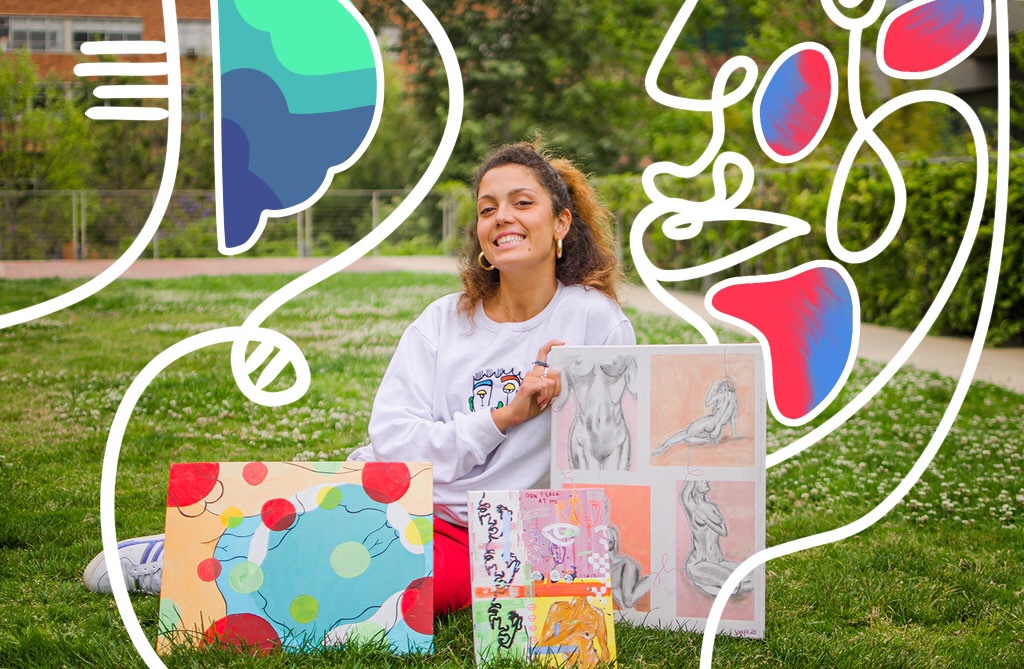 From doodles to tattoos, Soraya Saghbini’s abstract line art works in a multitude of mediums.

The third-year biochemistry student said she launched her @soosartsyshit Instagram page and website to sell her work in April 2019 after being encouraged by her close friends to share her work with a wider audience. Recently, Saghbini said that she produces stickers and t-shirts that showcase her swirling yet minimalist style. While she has been creative since she was young, Saghbini said the downtime during the pandemic has allowed her to fully develop her own abstract art mode.

â€œThe reason I do a lot of line art is that I’m a perfectionist,â€ Saghbini said. â€œI also started doing line art because I liked how imperfect it was. It’s art, and art is subjective, so it’s not about what looks good or what looks bad. It’s all about what you think is art.

Applying this mantra to her own process, Saghbini said that she mainly focuses on asymmetrical faces and the female body. Since she was young she says she has preferred to draw the torsos, and more particularly the curves of the female body. Saghbini said the minimalist style allows her to be free to decide how simple or complex each piece will be based on her own experiences.

â€œA lot of young girls – and only young people in general – find it difficult to feel good about themselves,â€ Saghbini said. â€œIt’s something that I’ve dealt with as well, so being able to reproduce the female body like a painting in its beauty shows how I’ve personally progressed. Being able to show (the female body) as a work of art helps me to believe that my own body is a work of art.

For Saghbini, creating art has always been a form of catharsis, a therapeutic way of working through his life experiences. Saghbini’s roommate and third-year psychology student Hannah Cass said Saghbini, someone who is generally outgoing, is more reserved when it comes to sharing his art. Cass said she often joked with Saghbini saying she was his unofficial manager, as it took a lot of persuasion to convince Saghbini to charge a reasonable price for her art.

Over the years, Cass said she got to see how Saghbini’s work has gone from general faces to a more colorful style. She said many of her pieces are gender neutral, and Cass especially enjoys the colors Saghbini uses to shade and capture texture.

â€œShe’s playing more with, ‘How do I make that look like a face without actually drawing a face?’â€ Cass said. “Recently, it was much more of a man and woman, which offers the viewer’s interpretation.”

According to Saghbini, each spectator’s ability to perceive her pieces in their own way allows her work to resonate best as she mixes abstract faces with female bodies. Now Saghbini has said that being a student has changed her process slightly. Ever since Saghbini said she lived with roommates, she tries to keep her messes as minimal as possible and works on a budget. She said this workflow had led her to experiment with different mediums, such as painting on clothing or wood, and, more recently, digital art.

While Saghbini attempted to paint in various mediums, third-year world studies and political science student Marty Hockey said that Saghbini also designed tattoos for himself and others. Although the first piece he bought from Saghbini was one of the T-shirts she sells with her designs printed on them, he said her flowing style was also made for a neat tattoo, leading her to order a custom piece from her.

Beyond painting for his friends, Saghbini said that making art allows him to escape the stresses of school or life as she enjoys the creative process as a respite from reality. While Saghbini has said that she wishes she could devote more time to art, she said that she did not see art as a likely career, as that would take away from its liberating aspect.

â€œIt’s so Zen for me that I wouldn’t want to make it my reality or my main goal,â€ Saghbini said. â€œI always say (to my friends), ‘You don’t need to know how to make art. You just have to let your imagination run wild, â€and I think that’s why I started. ”